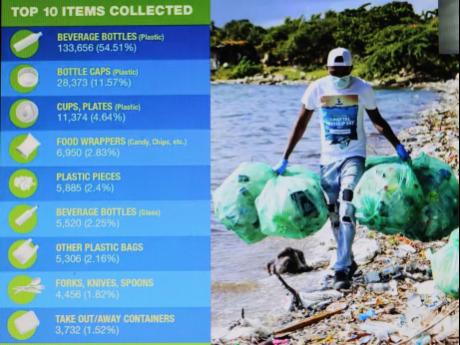 While data from the 2021 International Coastal Clean-up (IIC) in Jamaica suggests that there are some gains being made in terms of the profile of the garbage being removed from the country’s coastlines, national coordinator of the annual event, the Jamaica Environment Trust (JET), is sounding the alarm over a troubling emergence, a spin-off from the plastic ban implemented by Government in 2019.

The biggest gain highlighted by JET was the fact that for the first time Styrofoam, a brand name for a type of polystyrene (a light, usually white plastic used especially for putting delicate objects inside containers to protect from damage) – cups, plates, soup and other take-away food containers did not make it into the top 10 list of items collected.

“That’s another win for the plastic ban. Another first, however, was the fact that another plastic food take-out container material polypropylene (also known as polypropene which is a thermoplastic polymer used in a wide variety of applications) is now featured in the top 10 … another type of plastic which is also non-biodegradable and non-recyclable” JET’s Programme Director Lauren Creary warned.

She was speaking at Thursday’s ICC webinar, ‘A Bag a Bokkle’, where findings from its National Summary Report were released, as well as an assessment of the impact of the plastic ban.

Another significant finding was that while in 2018, 11,000 plastic drinking straws were collected and had consistently made the top 10 list, in 2021 there were only 1,300 collected.

Creary explained that this garbage, which was removed during seven underwater and 105 on-land clean-ups of the coastlines, did not necessarily represent garbage dumped by beachgoers, but represented a combination of garbage that was not disposed of properly and some which was illegally dumped in gullies.

“Whenever it rains, all of this washes down through the waterways, including gullies and end up on our coastlines, and so it’s very important to note the garbage you are seeing is not always as a result of the people who are using the beach on which it is found.”